So you want to get jacked. Here are the Three Keys to slapping 100 pounds on your back squat/deadlift/press/hamstring curl in six weeks, being the strongest person in the gym, and probably making the Olympics:

Now give me all your money.

Stop being a baby. The amount of progress you make depends on a combination of effort, adherence to the Three Keys and genetics. If you work hard and are disciplined you will get jacked – the rate and degree of jackedness depends largely on genetics.

Take an honest assessment of your work ethic, your nutrition and your sleep habits. A+ 100% in all areas? Then DO IT TO IT and play the cards you’ve been dealt. Your hand might be crappy, but you can also hide a pistol under the table and shoot people like they do in the movies.

If you’re lacking discipline in an area, make improvements where necessary and keep hammering away.

To get stronger you need to lift heavy weight. The End. Provided you aren’t being a moron about it and your nutrition and sleep are on point, you will get stronger. If you aren’t getting stronger, you are not following the Three Keys or you are being a moron.

There’s a crap ton of different and equally effective methods to go about lifting heavy weights – my suggestion is to stick with one until it works, then abandon it when it stops.

A fair amount of people smarter than myself would say this is an oversimplification, but that’s what we do here at Black Anvil – take potentially confusing crap and make it potentially not confusing.

For the average not freak-athlete, your strength building should begin with hypertrophy. All things being equal, a bigger muscle is a stronger muscle – so it’s time to get hooge. Think about muscle size as a strength ceiling – increase your muscle mass and you raise your potential for strength.

Another oversimplified example, using the back squat as the sample movement:

Now you’re like – Dude, that’s going to take, like, 3 months and I want to add 500 pounds to every lift in 3.2 weeks, but now would be better. And I’m going to say, dude, click off my page and head over to www.bodybuilding.com because I’m the one displaying knowledge and there is no room for impatient, skinny turds who don’t have time to dedicate to creating new muscle tissue and making appropriate central nervous system adaptations in order to express improvements in maximal strength. So let’s move on. 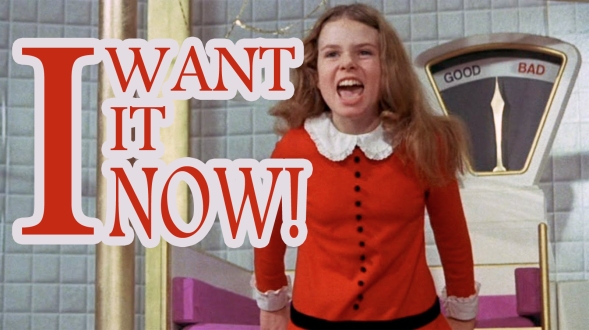 impatience will get you incinerated in the garbage disposal of gainz

A Way to be Less Dumb: Prilepin’s Chart (Skip if you hate numbers, don’t want to make your own strength program, understand the strength program you’re on, or if you just want to have a coach tell you what to do)

You can Google this dude if you want, so I’m not going to waste my finger endurance talking about him here, but Alexander Prilepin was smart so he did what smart people do and developed a chart with a bunch of numbers on it.

Following this chart will help keep weights heavy, but not too heavy (as well as not too light). Too heavy for too many reps for too long and you’ll end up slow, burned out, and hurt. Too light and you won’t…umm…be stronger.

A good rule of thumb is to run a cycle using total reps in the low to optimal range of suggested reps, and then play with the numbers after you see what happens. More reps is not optimal. Optimal is optimal.

Eat enough. Unless you know what you’re doing or are being coached through it by someone who is all science-y and stuff, if you’re trying to get shredded and blast the doors off your numbers, you’re doing it wrong.

So, step one, eat enough. How enough is enough? This is strength 101, so let’s skip total calories for now (it depends on what kind of training you’re doing) and head right into protein.

You will see recommendations anywhere from .5g/pound of bodyweight to 2g/pounds of bodyweight. This will take trial and error. Sorry, but it will. I used to swear by the 2g for pound of bodyweight, but I was tired, fat, and wasn’t getting any stronger. I’m now somewhere around .5g/lbs and my numbers are blasting through the before mentioned doors.

Personally, I’d establish a daily calorie requirement, and then start at the low end of this scale. If you’re getting stronger and recovering well, keep on keeping on. If not, click your protein intake up .3g and reassess.

Sleep is sleep. It’s the only thing that does what it does. It improve hormone levels, mental acuity, and muscle/joint repair. It also makes you unconscious and unaware of your surroundings which is a great non-destructive way to get you to forget about the stress of existing.

8 hours is great. More if you need it. “I’m ok with five” is coming from people who have never felt the nirvana of multiple weeks of enough sleep.

If you can wake up without an alarm, that is a good sign. The darker, more cool the room, the better sleep you will get. Consider supplementing with magnesium, vitamin D, melatonin, or GABA if you feel that you have some pharmaceutical needs.

I understand that in a busy world filled with family, obligations, and entertaining blue screens of apathy, it can be difficult getting enough sleep. But we are not talking about how to lead a balanced, happy, and fulfilled life – we are talking about getting swole. Which will probably make your life happier. So, it’s a win/win.

BOOM. You just punched your ticket into the Promised Land.

All aboard the Gain Train.